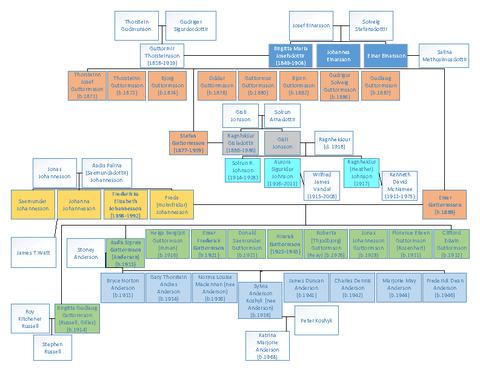 Guttormur Thorsteinsson (1838-1919), son of Thorstein Gudmunson and Gudridur Sigurdardottir, and Birgitta Maria Josefsdottir (1849-1904), daughter of Josef Einarsson and Solveig Stefansdotir, were married in Vopnafjordur, Iceland in 1869. In 1893 the couple, along with nine of their ten children—Thorstein Josef, Bjorg, Stephan, Oddur, Guttormur, Bjorn, Gudridur Solveig, Gudlaug and Einar—left Krossavik farm in Vopnafjordur for Canada, and settled in Husavik, Manitoba. The second son of Guttormur Thorsteinssson and Birgitta Maria Josefsdottir, Thorstein, stayed in Iceland only to follow the family to Canada in 1903. After a difficult start in their new home, the family became a part of the Icelandic community in Manitoba. The children grew up to establish farms, marry and begin their own families, and establish their own homes in Manitoba or other communities in North America.

Stephan Guttormsson (1877-1959), the fourth son of Guttormur Thorsteinsson & Birgitta Maria Josefsdottir, married Ragnhildur Gisladottir (1886-1986), daughter of Gisli Jonsson and Solrun Arnadottir, also from Iceland. The couple did not have any children of their own, but adopted the care of the daughters of Ragnhildur’s brother Gisli Jonsson and his wife Ragnheidur Gudmundsdottir: Solrun R. Johnson, Aurora Siguridur Johnson and Ragnheidur (Heather) Johnson. Stephan studied at the Central Collegiate in Winnipeg, Wesley College, and the University of Manitoba and later became a civil engineer and a surveyor in Winnipeg.

Rev. Guttormur Guttormsson, sixth son of Guttormur Thorsteinsson & Birgitta Maria Josefsdottir became a Lutheran minister as well as the author of a family memoir in the book Foreldrar Miner ( My Parents) (Bokautgafan Minning, Reykjavik: 1956), which was also published in 2007 by the University of Manitoba Press (Birna Bjaradottir and Finnbogi Gudmundsson, eds.) He resided in Minneota, Minnesota.

Hinrik Guttormson (1925-1945), son of Einar and Freda Guttormsson, was a Sergeant in World War Two and served as a Pilot Officer in Squadron 431. Hinrik was reported missing in action when his plane went down over Chemnitz, Germany on March 5, 1945. He was presumed dead on 30 October, 1945. His death was later verified on 1 March, 1948. A permanent grave marker was erected in Hinrik's memory in the Hanover War Cemetery, Germany. Henrik’s name is also engraved in Canada’s Bomber Command Memorial in Ottawa and on the War Dead Memorial at the St James Anglican Church in, Libau, Manitoba. James T. Watt placed Hinrik Guttormson's name on a marker, honouring members of 431 Squadron at the National Air Force Museum of Canada. To further honour Hinrik’s sacrifice the Manitoba government consecrated a Lake Guttormson, east of Lac du Bonnet, Manitoba in 1973.

Frederikka (Rikka) Elizabeth Johannesson (1898-1992), daughter of Jonas Johannesson and Asdis Palina Saemundsdottir, and sister of Freda Johannesson, lived in Husavik until her family moved to Winnipeg in 1916. In 1920 Rikka enrolled in the Registered Nurses Diploma Program at St. Boniface Hospital in Winnipeg, and graduated in 1923 to begin her nursing career. Frederikka married Harry Atkinson, and, after his death, married Herbert L. Moyer (?-1973). Frederikka was an enthusiastic Jehovah’s Witness.

Johanna Johannesson, also a sister of Freda and Frederikka Johannesson, was the mother of James T. Watt, future author of the book <a target="_blank" href="http://primo-pmtna01.hosted.exlibrisgroup.com/UMB:UMB_ALMA21558680830001651">“Lost in War,”</a> inspired by the life of his cousin Hinrik Guttormson.

The records comprising accession A14-70 were handed down through generations of the Guttormsson/Guttormson, Johannesson, Anderson and Russell families. Upon Sylvia A. Koshyk's attempt to compile the family's history, many materials, including some of the letters that Hinrik wrote to his parents and brothers and sisters, were donated to her by the family of Einar and Freda (Johannesson) Guttormson, including the effects of Stephan Guttormsson from his foster daughter, Ragnheidur (Heather) McNamee (nee Johnson). The materials collected by Sylvia Koshyk were donated to University of Manitoba Archives & Special Collections in 2014.

The letters comprising accession A14-74 were kept by Sergeant Hinrik Guttormson's sister, Birgitta Russell, and then passed down some of the letters to her children. Some of these letters were then passed on to their cousin, James T. Watt, for the purpose of writing his book "Lost in War." Watt later donated some of the letters to the University of Manitoba Icelandic Library, which were then donated to University of Manitoba Archives & Special Collections in 2014.

An online finding aid is available at the link below:

Previously donated to the University of Manitoba Archives & Special Collections by Katrina Anderson, daughter of Sylvia Anderson Koshyk, are the <a target="_blank" href="http://nanna.lib.umanitoba.ca/atom/index.php/katrina-anderson-fonds">Katrina Anderson fonds</a>, made up of her recordings of her grandmother Asdis Sigrun Anderson's life memories.

Other donations of Anderson and Guttormsson/Guttormson family history and related materials have been made to the University of Manitoba Icelandic Collection.