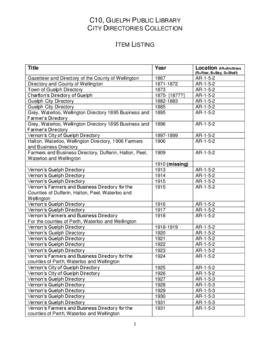 Collection consists of city directories, which since 1875, have made up of two parts: an alphabetic listing of people’s last names giving their occupation and home address and of street names. The directories may also contain advertisements of local area businesses and brief facts on population and average household income. Earlier directories included communities other than Guelph such as Erin, Peel, Minto and Puslinch Townships.

The directories are arranged chronologically by year.

Collection consists of photographs and other records, chiefly documenting the Ingersoll, Muskoka, Aylmer and St. Marys areas, collected by or given to amateur historian David L. Gibson. It includes photographs in several formats including cartes de visite, cabinet cards, tintypes, contemporary prints, and glass plate negatives and is comprised of two studio collections: the Hugill studios and the H.F. Robinson Studio. It also includes photographs and other records related to the Gibson and the Foulds families as well as records concerning David's personal research and family history.

As a child in the late 1920s, Gibson first befriended Edgar H. ("Ed") Hugill on Keewaydin Island in Muskoka where Hugill worked as the summer postmaster. Hugill operated a photo studio in Ingersoll, Ontario, initially in conjunction with his father, John, and later on his own. After Ed Hugill's death in 1955, the collection of negatives and photographs from the studio came into Gibson's possession. Gibson used the photos in writing books about Keewaydin Island and the Hugill studio.

Photographs in this collection consist of negatives and prints of family members and studio customers as well as interiors and exteriors of homes and businesses in the Ingersoll area, boats and cottages on Keewaydin and surrounding islands, and events in the Ingersoll and Muskoka areas.

Gibson also obtained the collection of another photographer, Harold Franklin ("Frank") Robinson, possibly through the estate of a Wilford Smith. The photographs included in this collection consist of individual and group portraits often taken at weddings, reunions, social events, and YWCA camps in Aylmer and St. Marys, Ontario.

Gibson was an avid genealogist. He gathered photographs documenting the Gibson as well as the Foulds families. The Foulds, David's maternal grandparents, were early settlers in the Brantford area and contemporaries and neighbours of Alexander Graham Bell. The photographs in this collection consist of family portraits, some of which were used to illustrate David L. Gibson's book on the Foulds family.

For a more detailed description, use this link to the Archives of Ontario's descriptive database: http://ao.minisisinc.com/scripts/mwimain.dll/144/PROV/PROV/REFD+F+4592?SESSIONSEARCH

For a more detailed description, use this link to the Archives of Ontario's descriptive database: http://ao.minisisinc.com/scripts/mwimain.dll/144/PROV/PROV/REFD+F+4546?SESSIONSEARCH

Collection consists of a subpoena issued to Hector Ross in 1836.

Collection consists of three scrapbooks pertaining to prominent British and Canadian jurists from the 1500s to the 1800s, created and/or accumulated by an unknown source. The scrapbooks contain prints and other illustrations, biographies relating to these jurists, as well as a number of Quebec court documents. While the biographies and illustrations are organized by nationality, the arrangement of records takes a roughly chronological order.

Collection consists of a mixture of materials about Robert Gourlay and his family, and records created by him and his family. It contains correspondence, genealogical charts, autobiographical notes of Gourlay, records regarding the Gourlay family in Scotland, records regarding the disposition of Gourlay's lands in Dereham Township in Oxford County, Canada West, as well as two replies to questionnaires submitted by Gourlay. Correspondence includes material regarding Mrs. Jean Gourlay and children of Robert Gourlay. Also included is correspondence of William Renwick Riddell, an early biographer of Gourlay, and correspondence concerning people possessing documents relating to Robert Gourlay. Correspondence also includes letters between Robert Gourlay and his first wife Jean (Henderson) Gourlay, and the children by his first wife (Jean, Jessie, Oliver, Helen, and Catherine). Most of Gourlay's letters to his family at this time were written from the United States when he resided in Massachusetts, Rhode Island, and Ohio. These letters refer to family matters, and Gourlay's struggle with the government of Upper Canada and the government of the United Province of Canada.

Material regarding the disposition of Gourlay's lands in Dereham Township consists of correspondence between Robert Gourlay's daughter Helen, and his second wife Mary concerning a dispute over the real estate. Other records include a promissory note, a bond, a discharge of debt, and memorandum of agreement between Mary Gourlay and Joseph Riddell concerning intent to convey land, and a power of attorney between Robert Gourlay and John Smith of Dereham.

Collection also includes miscellaneous items, including: the original prospectus of a newspaper called the Commonweal which was to be edited by Gourlay; replies from Trafalgar Township to questionnaires posed by Gourlay for the collection of data for the Statistical Account of Upper Canada; minutes of a meeting held by inhabitant of Haldimand Township including the chiefs of the Five Nations for the purpose of supplying data for the same account; newspaper clippings concerning the career of Robert Gourlay (three of which were written by Mabel Burkholder); a memorandum of biographical data concerning Robert Gourlay by James McIntyre; a typescript of excerpts of articles in the Ingersoll Chronicle concerning Gourlay's bid for election to the Legislative Assembly; notes on Robert Gourlay by Ethel Canfield; and an excerpt from the Illustrated London News, concerning the choice of Bytown as Canada's capital.

For a more detailed description, use this link to the Archives of Ontario's descriptive database: http://ao.minisisinc.com/scripts/mwimain.dll/144/PROV/PROV/REFD+F+72?SESSIONSEARCH

For a more detailed description, use this link to the Archives of Ontario's descriptive database: http://ao.minisisinc.com/scripts/mwimain.dll/144/PROV/PROV/REFD+F+73?SESSIONSEARCH

Collection also includes three photographs. Subjects include: Bruce's swearing in ceremony, 1932; his first formal appearance as Lieutenant- Governor, 1932; and a group of officials with the Duke of Kent.

For a more detailed description, use this link to the Archives of Ontario's descriptive database: http://ao.minisisinc.com/scripts/mwimain.dll/144/PROV/PROV/REFD+F+78?SESSIONSEARCH

The collection consists of a small group of original letters sent and received by John A. Macdonald, dated 1855-1891. Subjects of the letters include: patronage appointments, a school bill, the 1860 visit of the Prince of Wales, Canadian confederation, election issues, and government railway policy. Also included is a letter of condolence from Conservative members of both Houses to Lady Macdonald, following the death of Sir John A. Macdonald.

For a more detailed description, use this link to the Archives of Ontario's descriptive database: http://ao.minisisinc.com/scripts/mwimain.dll/144/PROV/PROV/REFD+F+35?SESSIONSEARCH