Collection consists of photographs believed to be taken by William Notman or Alexander Henderson depicting scenes in Ontario, Quebec and British Columbia during the latter half of the nineteenth century.

Photographic subjects include: buildings, churches, trains, waterfalls, rivers and a variety of other urban and rural landscapes and portraits.

The photographs are arranged geographically.

For a more detailed description, use this link to the Archives of Ontario's descriptive database: http://ao.minisisinc.com/scripts/mwimain.dll/144/PROV/PROV/REFD+F+4357?SESSIONSEARCH

Collection contains six photographs pertaining to the Dixon family including commercial buildings, school portraits, and one photograph of an unidentified group.

Accession contains two photographs pertaining to the Enterprise Foundry Co. and one list of names corresponding to one of the photographs. 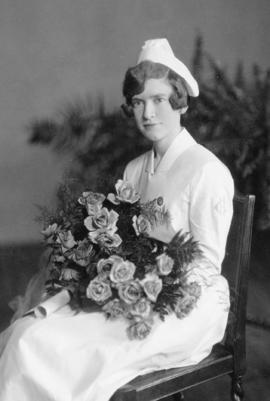 The collection reflects Edith Evelyn Turner’s career at the Children’s Hospital, the Winnipeg General Hospital and the Health Sciences Center. Her records document her work as a student, a nurse, a supervisor, a staffing co-ordinator, a designer, and an advisor. The collection has been arranged into seven series and includes textbooks, photographs, pins and name badges, yearbooks and a graduation programme, silver spoons, and design patents.

The collection consists of 338 photographs, one negative, and documents relating to the cross family. The photographs in the collection come from four family albums donated by Don Cross after the death of his mother. They consist primarily of outdoor activities in and around Prince Rupert featuring family and friends as Don described his parents as great outdoors people who went everywhere. Areas and subjects in the photographs include: Salt Lakes, Metlakatla, Hays Mountain, Picnic Bay, Lucy Islands, Falls River, Remo, LakeElse Lake, Victoria, pets, steamships and people playing shuffleboard on deck, docks, railway tracks, swimming, boating, hiking, camping, scouts, class picnics, nurses, parades, the drydock, and fishing. It also includes a Canadian Red Cross registration form for Alan (1944-1945), and a Prince Rupert High School certificate for Phyllis (1925).

Records pertaining to Herbert L. Logan and the First and Second World Wars include circulars, telegrams, and photographs relating to the New Brunswick Rangers; messages and orders from commanding officers relating to the 7th Field Hygiene Section of the Royal Canadian Army Medical Corps; a postcard of the 7th Field Hygiene Section; identification cards, permits, tickets, shoulder patches, and military buttons; propaganda leaflets dropped by the R.C.A.F. over Germany in German (1930s); handbooks and booklets; the constitution of the Canadian Legion of the British Empire Service League [191-] and other material pertaining to the Canadian Legion; and newspaper clippings.

The collection also includes the constitution and 3 membership booklets relating to the Loyal True Blue Association that functioned at Youngs Cove, Queens County, in the 1920s and 1930s; a general store account book for John M. Brown's general store at Quaco, N.B., (1877-1880); accounts relating to the steamboat St. George and the steamer John Ward (1830s); the Intercolonial Railway Time Table of Trains conveying Their Royal Highnesses, the Duke and Duchess of Cornwall and York from Saint John to Halifax, 1901; an English Speaking Citizens Committee of Moncton "reply to French propaganda," issued in 1934 to counter two circulars reportedly broadcast in Moncton and area by the Assomption Society of Moncton; and commercial advertising leaflets, letterheads, bills of sale and accounts pertaining to businesses in Albert, Westmorland, and Saint John counties. Of particular interest is an announcement issued by T. H. Estabrooks, of Saint John, of the launch of the "Estabrooks' Red Rose Coffee", [1901?].

The collection consists of 25 photographs including: photographs of Harry H. Watson and Edward E. Leason, Government House and the Parliament Buildings, logging, ranching and agriculture, fishing, M.V. Princess Charlotte in the Drydock (Esquimalt), and various scenic shots including 1 of a golf course (Victoria?).

The records were acquired, assembled, and created by Edward Enright, the donor, over several decades to illustrate the history of the MacLaren Advertising agency, Toronto, which was run by John A. MacLaren from the early 1920s, and developed into an international advertising business that is still in operation today.

The collection documents the business activities and products of a company that created advertisements, including radio and television advertisements, to sell the goods and advance the commercial interests of its corporate clients. MacLaren Advertising clients included General Motors, General Electric, Imperial Oil Canada, Canada Packers, and the Government of Canada. The collection includes a video created by the company in 1984 as a retrospective, titled, "MacLaren: The Story So Far" (see F 4467-10).

The collection also documents the numerous awards won by the company. It includes photographs and textual records depicting the firm's success in winning the Canadian Advertisers and Sales Executives' silver medal in 1942, numerous newspaper awards in 1963, Strategy's Agency of the Year in 1995, Marketing Magazine's Agency of the Year in 1988 and 1999 and the recognition of John MacLaren as a Canadian Giant in the advertising business. The collection also includes a Tribute to John MacLaren presented as an illuminated resolution by the artist, A. J. Casson, signed by the executive staff in Canada and England expressing their pride in the business and in their leader (see F 4467-1).

Collection also includes MacLaren family records assembled by the donor concerning John MacLaren's illness and death in Florida in 1955, and records related to his wife Christine MacLaren, his sister Audrey Jane MacLaren, and his brother William Hunter MacLaren. Included also are home movies of various family events and the wedding of Barbara, John A. MacLaren's daughter.

For a more detailed description, use this link to the Archives of Ontario's descriptive database: http://ao.minisisinc.com/scripts/mwimain.dll/144/PROV/PROV/REFD+F+4467?SESSIONSEARCH