Item is a book written by Doris Evans and Gertrude Tynes that features profiles of Nova Scotia's segregated schools and teachers at those schools, as well as photographs and speeches from the Retired Teachers of Segregated Schools of Nova Scotia's 1990 reunion.

The fonds consists of correspondence, programs, photographs, memorabilia and proceedings of the 1974 Congress. Also included in the fonds are some records of the Canadian Mathematical Congress, which served as official host for the event.

The fonds consists of documents relating to the planning and organization of the 1980 Jasper school reunion. Includes budgetary information (1980); itineraries, invitations, and tickets to events (1980); alumni lists (1980); Alberta 75 information which looks at the Alberta Government program that partially sponsored as well as provided some of the impetus for the event (1980); Jasper High School attendance records (1929-1940); the homecoming register of all previous graduates who attended the event; lists of Graduates (1920-1980); as well as photocopied newspaper clippings pertaining to alumni from over the years. Also consists of photographs taken at the reunion (1980) as well as photographs collected as mementos as part of the album project (1929-1980).

Fonds consists of correspondence with various businesses, the City of Calgary and dignitaries involved in the 25th Anniversary celebrations; correspondence with all the Faculties and Departments regarding their activities; plans, schedules and reports from the University Open House in October; material on the Imperial Oil Lectures. Also includes two posters, one from the Visions anniversary book and one from the Nickle Arts Museum. Also includes various ephemera: pins, t-shirt, plaques, ribbon and a framed proclamation from the City.

Consists of correspondence and minutes of meetings from the 25th Anniversary Committee; Place of Vision book; records, reports and publications from various campus units documenting how they celebrated the 25th Anniversay events with open houses, awards, projects, concerts, tours, displays, performances and demonstrations. Also includes photographs of the October, 1991 Open House and photograph contact sheets of displays from the Archives and Special Collections. 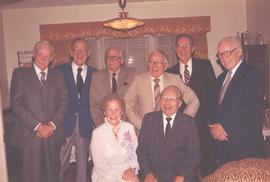 There are 32 copies of <i>Cassell's Popular Educator</i> and a collection of postcards of assorted scenes of Alberta and Great Britain around World War II era.