Fond consists of a drawings. photographs , and textual records regarding medals , training and Murray's time spent in Cyprus and Egypt. Also included is Newspaper Clippings and memorabilia.

Fonds consists of a series of DVD's , Lest we Forget projects created by Belleisle Students on 8th Hussars Soldiers that lost their lives to War. A complete list of Soldiers is available . 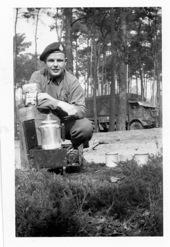 Fonds consists of 156 photographs from Boar war , including photographs of a Queens Own Rifles of Canada cap badge with a 2 in the Center, four medals from Left to right: Distinguished Service Order, Queen's South Africa Medal, British War Medal, and the Victory Medal and of a pencil shaped like a bullet and inside a cartridge from 1914. List of Photos available.

Fond consists of 2 photographs one of Cpl. Atkinson and the other a group photograph

This fond consists of photographs from 1935 and 1951. The majority are from the funeral of Lt. Col. Ross . Newspaper clippings organized into 2 scrap books plus pamphlets from various special occasions , and nominal rolls .

Fonds consists of Photographs and Materials on Alward's Hussars Training starting in October 1946 through to Camp Borden training 5 Nov 1950 - 10 May 1951.

This fonds consists of records regarding a  Membership list with names and address ,News letters of "D" Squadron, Copy of Paper Sand everywhere and No beach Newsletter of Reconnaissance Squadron Sand Every Where and No Beach .