The fonds consists of materials collected and compiled by JAHSENA in 2003. The videocassette is of the Negev Dinner held in Mr. Feldman's honour in 1993.

The fonds consists of approximately 40,000 photo images (prints, transparencies and negatives) created or commissioned by the Communications Group, one of the six Groups which made up OCO. Most of them are from the Information Services Division. Some, mostly duplicates of those from Information Services, are from Products and Advertising and from Community Relations. All of this material is in English. Most of the images are in colour, the transparencies are 35mm and enclosed in slide cases, and photo prints are 8 x 10" or smaller. Some of what are referred to as negatives are in fact internegatives made from transparencies. This material is in very good physical condition. These photo images were commissioned and created for the purposes of publicizing the 1988 Olympic Winter Games before they occurred, of educating people about the Games, and of documenting preparation for the Games and the Games themselves. OCO'88 used them as research material and as a record of its activities. For more information regarding the XV Olympic Winter Games, Olympic Photograph Collection scope/content information, please link to the City of Calgary Archives homepage and click on the "fonds level descriptions" link.

The collection consists of photographs of the 1928 Prince Rupert City Billiard League winners, and employees of the Canadian Fish & Cold Storage plant in Seal Cove.

The collection includes souvenirs of the IX Olympic Winter Games, held in Innsbruck, Austria, in 1964. Included are a programme, two tickets and cancelled postage stamps.

The collection consists of recorded interviews and interview summaries with pioneers of Waterton Lakes National Park. Frank Goble, and Ed and Cheryl Mitchell were interviewed but not recorded, although notes were taken and are found with the inventory. There is very poor sound quality on the Tom Jenkins recorded interview due to a cassette malfunction. The Frank Johansen interview summary is accompanied by extensive biographical material about his great aunt, Lu Nielson. 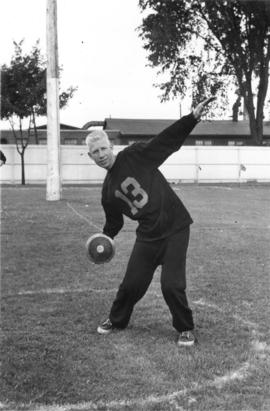 The collection consists of photographs of Viking, Harland, Gilpin, Innisfree, and Woodham, including personalities, farming, events and businesses (1900-1967); and E.A. Nelson's homestead receipt and certificate of naturalization (1907-1911).

This collection consists of documents about the Victoria Skating Rink. There are 2 stock certificates for single shares purchased in 1882 and 1883, as well as two letters and a receipt, to John Walsh of Mill Street, from R.J. Armstrong regarding the use of the alleyway between Mr. Walsh's home and the York Theatre (connected with the Victoria Skating Rink). Some seasons tickets are also included.