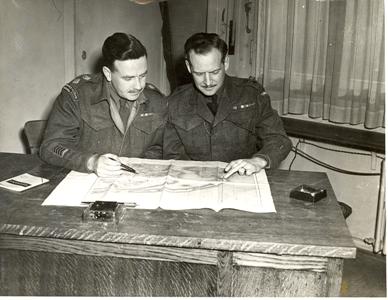 Sean Gilchrist
CW Gilchrist
History -
Lt. Col. C. W. Gilchrist OBE. E.D. ADPR. Word of the promotion , In Italy of Major C Whitney Gilchrist the rank of Lieutenant - Colonel has been learned from Saint John. Col Gilchrist former Saint John newspaperman and at the outbreak of war on the staff of the Canadian Broadcasting Corporation recently succeeded RS Malone as Canadian assistant director of public relations with the Allied Armies in Italy and also. Editor and Chief of the Maple Leaf, the daily newspaper published in Italy for the Canadian Forces in theater of War. At the start of the war Col Gilchrist was called out for active service with the Royal Canadian Army Service Corps unit in Saint John , in the rank as Captain . He was promoted to Major in 1940 and assumed command of the Service Corps Unit . In July of 1941 he reverted to Captain at his own request in order to transport to the Canadian Armored Corps then being formed . He joined the then 8th Princess Louise's (NB) Hussars now the 5th armored Regiment and went overseas in October 1941. He attended various qualifying courses in England and was appointed staff of the second Canadian Armored Brigade in June of 1942. He was posted to headquarters of the First Canadian Army as assistant public relations officer on reorganization in September that year. He was selected as Canadian public relations representative to the First British Army and remained in Algeria and Tunisia until the end of the campaign . Col Gilchrist returned to the United Kingdom in the mid 1943 in time to join the First Canadian Division detachment for the Sicilian campaign having been appointed deputy assistant director of public relations with the rank of major. He was one of those that were forced to swim ashore in D_Day from a Stranded landing craft.In December 1943 he continued to command the field detachment operating in the forward areas.Col Gilchrist promotion to his new rank in the 30's came as a pleasing news to his many friends and former business associates . He is especially well known in the newspaper circles.

Series consists of a 3 page letter sent home from Gilchrist 1943 to his women Jinny From Somewhere in Italy..